Home»About Us»Blogs»Contaminants and Your Well: Keeping Ahead of Nitrate

Contaminants and Your Well: Keeping Ahead of Nitrate 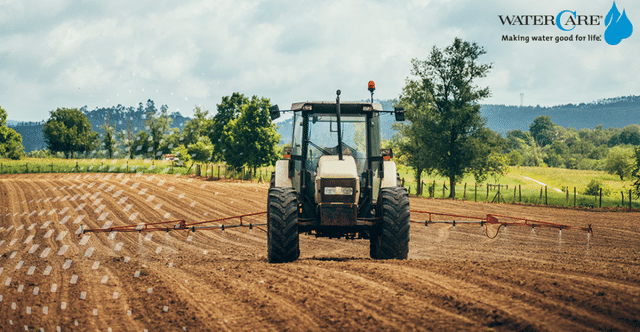 Life in the country has its own set of distinct luxuries compared to city living. Wide-open spaces, distant neighbors, quiet roads, the slower pace of everyday life, the…overpowering smell of manure from the Super-Farm down the highway a few clicks.  Living disconnected from some of the big city perks can make things a little inconvenient at times when it comes to maintaining your home. There’s some work involved with country life that doesn’t have to do with plowing and planting the back forty acres.

Owning a private well is one of those rural challenges. Instead of holding the city water treatment facilities accountable for the safety of your home’s water, it’s up to you to monitor and keep it free of potentially harmful contaminants. Even if you’ve been committed to defending the purity of your well by scheduling routine water tests and maintaining it regularly, it may still be susceptible to some outside influences beyond your control.

Nitrate, the odorless, colorless, and tasteless contaminant commonly associated with large agricultural operations, is defined by the EPA as one of those contaminants.

Nitrate occurs naturally in the environment as bacteria breaks down nitrogen found in soil and organic matter. When highly concentrated amounts of nitrate are discovered, though, it is usually due to human influence in the form of the large, industrial farming operations that you may pass (and smell) on your commute into town.

Since nitrate is found in all animal waste and some fertilizers, widespread application to crop fields means that large concentrations of nitrates have the potential to work their way into groundwater sources. Following rainfalls, nitrates seep down into these sources which are then drawn from by private wells in the area. Naturally, the result is a well that is contaminated by nitrate.

Another common culprit in private well contamination is poorly maintained septic tanks. Like the manure being spread on farm fields, human waste contains large amounts of nitrate as well. If your home’s septic tank has a substantial leak in it, its proximity to your private well can quickly introduce high levels of nitrate into the water that your home draws from.

Shallow wells and wells that pull from shallow water sources are the most likely to have nitrate contamination. Alternatively, if your well is deeper, properly sealed, and draws from a deeper source, you are less likely to experience contamination due to the difficulty of the source contamination material to reach the groundwater that your well pulls from.

While the mega-farms take a lot of the blame for the nitrate contamination of groundwater in the country, lawn treatment and golf course maintenance are significant offenders of nitrate runoff within the suburbs. The fertilizers used to keep lawns pristine on the golf course and in the great suburban backyard also make their way down into aquifers and below-ground water sources. Municipalities that draw from these sources treat them within industrial treatment facilities to bring contamination levels down to acceptable standards.

Effects of Nitrate in Drinking Water

The EPA has mandated that the maximum amount of acceptable nitrate in drinking water is 10 mg/l for the average adult to consume while pregnant women and children under the age of six months should avoid nitrate consumption completely.  Drinking water that is discovered to have nitrate concentrations that surpass EPA standards should be treated. A 2006 United States Geological Survey study discovered that more than one million private well owners are located in areas with groundwater that exceeds the federally accepted 10 mg/l MCL. The map below shows some of the areas with the highest risk of nitrate contamination based on that 2006 study. 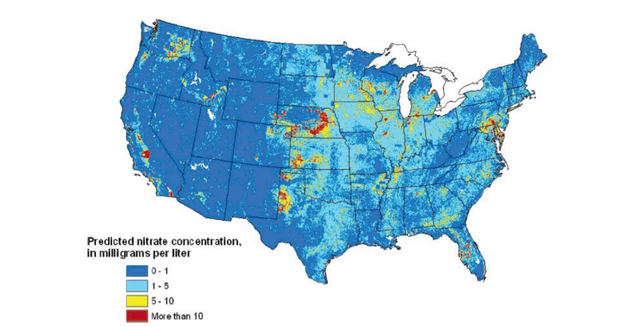 There has been little correlation between high amounts of nitrate contamination in drinking water and poor health in otherwise healthy adults. The same is not true for infants under six months old, though. It has been determined that high nitrate concentration in water can seriously affect blood oxygen levels in children six months old and younger, presenting some dangerous and even life-threatening symptoms. The resulting condition, often called Blue Baby Syndrome, is due to a decreased amount of hemoglobin in the baby’s blood which is responsible for carrying oxygen around the body and supplying it to tissues and cells.

Parents are strongly advised to completely avoid using any water that is suspected to contain nitrates when giving an infant younger than six months old water to drink, or when mixing it with formula. Pregnant women are also advised to avoid cooking with or drinking water with any level of nitrate in it.

How to Treat Nitrate

One of the biggest problems with nitrate is its difficulty to detect it. Since it is odorless, colorless, and tasteless, there are no initial indicators that your well may be affected. Also, since nitrates have the potential to be introduced to the water that your well draws from at any time, it is necessary to test well water annually to detect any level of contamination.

If a water test tilts positive towards contamination, it’s time to bring in the professionals. Nitrates can be difficult to treat and require a true water treatment expert to work towards reducing them in your well and home. Regarding treatment in your home, the Water Quality Association (WQA) has approved a few specific techniques to remove nitrate from drinking water that includes using chemical reduction, ion exchange, and reverse osmosis.

Reverse Osmosis (RO) is one of the more effective and less involved removal methods but still requires an expert to install and test properly. A point of use system, which is connected to a dedicated drinking water faucet, is small and often sits below a sink. In order to make sure that the Reverse Osmosis unit is capable of removing nitrates from your water source,  your water treatment professional will install a RO unit that is certified to reduce nitrates.

WaterCare’s Ultrowater RO system is one of those that is certified for the reduction of nitrates as well as a host of other common water contaminants from your water. The multi-stage filtration process traps and filters contaminants, leaving you with crystal clear, great-tasting drinking water that you can trust.

Don’t let the concerns of nitrates in your well’s water get in the way of enjoying rural life. Call your nearest WaterCare dealer today and schedule a comprehensive water test!